Preparations for the 2022 National Elections 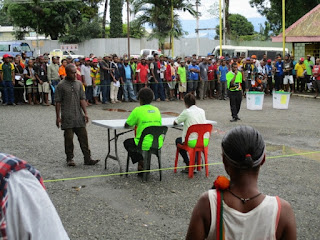 The Registry of Political Parties has outlined its plans to prepare for the 2022 national elections. In 2021, the Registry is rolling out the following activities;
• Awareness on political parties
• Conducting workshops for political parties to prepare them for the 2022 national elections
• Mentoring of women candidates
These are the three main activities for the Registry in 2021. The roll out of these activities however will depend very much on the funding that it will get from the Government.Beside the roll out of these activities, there are a couple of urgent matters that the Registry would like to bring to the attention of the public but more so the Members of Parliament because of their importance to the mandate of the Registry.
The first is the need for the passage of the Revised Organic Law on the Integrity of Political Parties and Candidates (OLIPPAC). The passage of the Revised OLIPPAC has been outstanding since 2013. In 2021, the National Executive Council in its NEC decisions approved the Revised OLIPPAC and it has been gazette and with Parliament now for distribution. Historically, the passage of the OLIPPAC was one of the significant reforms passed under the Leadership of the late Prime Minister Sir Mekere Morauta. It totally transformed the political landscape in the country. Due to the Supreme Court decision of 2010 which nullified certain provisions of the Law, the OLIPPAC therefore was revised. The Revision of the OLIPPAC started in 2013 up until now awaiting debate and passage on the floor of Parliament.
We are now in 2021, the Registry is working around the clock to get the Revised OLIPPAC to be deliberated this year before the 2022 national elections. The approval by NEC in 2020 is a positive step in moving the Revised OLIPPAC forward therefore the Registry is asking the Government to put the Revised Law on the agenda of Parliament this year.
The second issue that the Registry is now confronted with is the recent joining of small parties by MPs. While it is the prerogative of the MPs to make such decision and action, these small parties did not win any seats in the 2017 national elections and have become targets for MPs who want to become leaders of political parties. The result of MPs joining these small parties is counterproductive to the view of the Registry who want to see parties winning seats in national elections rather than parties getting MPs through such practice. It defeats the whole purpose of having strong parties with strong policies that attracts support from the people during elections rather than MPs joining these small parties at their own convenience.
An important consideration too to this practice is that these small parties would become “one man parties” and the executives would be on public payroll with the Presidents and Treasurers receiving monthly stipends and the General Secretaries receiving fortnightly salaries. These are executives who failed to work hard in winning seats in elections but now will be on payroll due to a MP joining their party. The cost of stipends and salaries is another additional costs to the public finance.
The Registry is now looking at this matter to discourage MPs from making such decisions due to the costs involved and more so undermining the ability of the party executives to work extra hard to win seats during the elections.
Posted by pngpartynews at 7:22 PM
Email ThisBlogThis!Share to TwitterShare to FacebookShare to Pinterest
Newer Post Older Post Home