By William Garena The Registry of Political Parties was delighted to welcome Governor for Central Province Honourable Robert Agarobe, who paid a courtesy visit to the office on 4th February 2021. It was a first for such a visit by Governor Agarobe since being elected into office in the 2017 National General Elections. Governor Agarobe was accompanied by his electoral staff Mr Leonard Tale and met with the Registrar Dr Alphonse Gelu and some staff of the Registry. 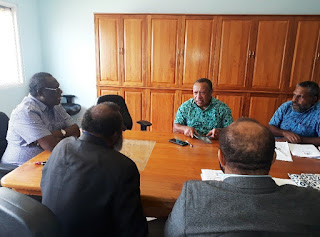 It was great to see a national leader such as the Governor in taking time out to visit state agencies such as the Registry of Political Parties to talk about national issues that were affecting the country’s development. The flow of discussions was more informal and open where major discussion points focused on issues of governance but more specifically, on our political system and how it affected our system of government. Governor Agarobe believed that having workable systems in place contributed towards a strong and reliable political system that contributed to having an effective government.
During the meeting the Central Governor raised some specific issues closely related to our system of government. This issues were of great national interest that included votes of no confidence, government formation, direct election of the Prime Minister, roles of MPs in service delivery and strengthening of the political party system. He stressed that by addressing these issues, this could help improve and strengthen the current political system to enable an effective system of government. A brief mention was also made about developmental issues relating closely to land and natural resources which the Central Provincial Government is looking at addressing through their soon to be launched provincial development plan called the “Smart Plan”.
On that note, the Registrar continued the discussions by informing Governor Agarobe on the efforts of the Registry in promoting and strengthening the political party system since 2018. This included work on areas such as the direct election of the Prime Minister, a desk-top study on the electoral/voting system, women’s political participation and representation in Parliament, and the overall promotion of democracy in the country. Copies of concept notes for the work on the areas mentioned above, together with a short brief was prepared and submitted to the Office of the Central Governor for his perusal. Concerns were also raised with Governor Agarobe of funding support from the National Government which has not been forthcoming towards implementing key programs of the Registry.
Towards the end of the discussions, a request was made to Governor Agarobe by the Registrar to bring to the attention of the Government, Parliament and the Prime Minister important issues that included: the passage of the Revised Organic Law on the Integrity of Political Parties and Candidates (OLIPPAC) Bill; release of adequate funding to allow the Registry in strengthening the political party system and prepare political parties for the 2022 National Elections; to assist the Registry to promote women in politics; and to recognise and give more prominence to the Registry of Political Parties as a lead state agency in political reform agendas and discussions on national issues that are of interest to our National Leaders and the country as a whole.
The short visit by Honourable Robert Agaraobe proved fruitful and that important issues concerning national interest was discussed in a more open and informal manner. Before taking his leave, Governor Agarobe assured the Registrar that he would relate the Registry’s request that required the Government’s support. The Registry invites and welcomes any of our National Leaders to visit the office and is open to hosting discussions of significant national interest and discussions related closely to promoting and strengthening political parties in Papua New Guinea.
Posted by pngpartynews at 9:24 PM
Email ThisBlogThis!Share to TwitterShare to FacebookShare to Pinterest
Newer Post Older Post Home