By Madeline Saga
The Registry of Political was part of a delegation that included party executives selected by the UNDP who also funded and organised the forum on political parties in Honiara, Solomon Islands from the 18th to 19th September 2019. 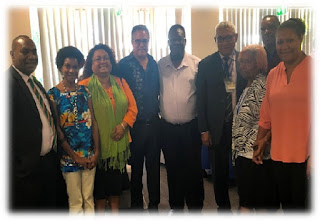 The attendees were Registry, Dr Alphonse Gelu, Emmanuel Pok, Madeline Saga, National Alliance Party, Joyce Grant, PANGU Party, Morris Tovebae, Eri Singin, youth rep, Peoples Progress Party Joe Las, youth rep, Allegiance Party Grand Chief Ila Geno and Peoples’s National Congress Party, David Dom Kua. The Senator of Hawaii, Senator Kalani English gave a keynote address on establishing an Inclusive Political Party from the United States experience. He emphasised the importance of sustainable development goals by implementing them within party policies that would have a snowball effect into state institutions that are lacking and that need to be addressed within a society that is intending to be inclusive. He further stated that the language voters use also known as their “mother tongue” is crucial for political parties when addressing inclusivity for all minority groups.

The two day forum included sessions on sharing examples of guidelines for inclusive political parties, the role of Political Party regulators in promoting inclusivity and making political parties inclusive of youth and other marginalised groups.

Participating political parties also gave their experiences about the challenges they faced when trying to apply inclusivity that include common issues such as:

The size of membership and leader focused

Having said that, a number of case studies were presented where inclusivity was achieved by introducing changes in either their electoral laws or party laws. Nepal in particular was a classic example whereby a shift from First past the post electoral system to the parallel system also encouraged the introduction of the Electoral Candidates Quota system in all levels of society. Parallel voting describes a mixed electoral system where voters in effect participate in two separate elections for a single chamber using different systems, and where the results in one election have little or no impact on the results of the other.

This forum was a follow up from last year held in Vanuatu and the first in Fiji in the previous year as part of the on-going support of ensuring political parties within the region work in partnership to allow effective democratic principles are upheld through political parties from each country. A similar forum will take place in November in Port Moresby that will include political party executives and women intending candidates.
Posted by pngpartynews at 11:29 PM
Email ThisBlogThis!Share to TwitterShare to FacebookShare to Pinterest
Newer Post Older Post Home