By Madeline Saga
A Two day campaign forum conducted by the Australian Labor International was held in Cairns on June 4th and 5th 2019. The purpose of the forum was to gauge views and share experiences of the current political situations and issues of each participating country. A total of 26 participants took part in this event from countries within the Asia Pacific region namely India, Timor Leste, Myanmar, Papua New Guinea, New Zealand, Indonesia and Australia. The majority of the participants represented political parties or regulatory organisations such as the Registry of Political Parties.
Elias Hallaj the International Projects officer from the Australian Labor International (ALI) began the first day of the forum by presenting an over view of the Australian Labor Party (ALP) and ALI. Each participating country was then given the opportunity to present a summary about their country history and political framework. The assistant national secretary of the ALP, Paul Erickson presented an analysis of the Australian Federal Election followed by Senator Clare Moore who shared her experiences on networking, mentoring and safety valves as a candidate. Participants were also given a greater understanding of the Indonesian electoral voting system and its political party system presented by Ms. Sondang Tampubolonn of the Nesdem Party of Indonesia. 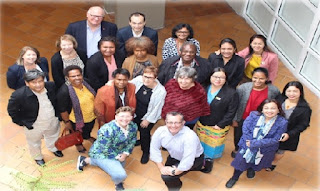 The Registrar Dr Alphonse Gelu began the second day of the forum presenting his paper on building party profiles and party visibility. Elias Hallaj and Paul Erickson then presented with an open forum for discussion on “What makes a Healthy Campaign?” Dr Lesley Clark presented a session on Successful Candidates – learning from and supporting winners. She also shared this session with Dianna Lacy of the New Zealand Labour Party. Andrew Dettmer, National President of the Australian Manufacturing Workers Union gave a detained presentation about the Benefits of Training and the Role of Trade Unions respectively and invited participants for an open discussion on these two topics.
The two day forum helped the Registry identify a number of issues that were of significance to both political parties and their candidates here in Papua New Guinea. This included; The Registry to propose mentoring or advice to new Members of Parliament (MP) after the elections through their political parties Create a group for women in politics Keeping track of women candidates, past and intending candidates Invitation to women to include incentive/ fee/ funding Senior members of Parliament to provide mentoring to new MP’s Registry to encourage Political parties for the formation of Parliamentary women’s caucus Annually practice parliament pre-training Encourage Political parties to ensure clear demarcation of Parliamentary leaders and party executives The Registry was also invited to make two separate presentations regarding the party system in PNG and issues surrounding women candidates during the elections. The training was informative for the Registry as it helped identify key areas in terms of party support to women candidates before the elections that need to be addressed. But, most importantly the engagement of parties and their executives with their members and intending candidates. The Registry will announce a similar training to be held in Port Moresby later in the year.
Posted by pngpartynews at 4:00 PM
Email ThisBlogThis!Share to TwitterShare to FacebookShare to Pinterest
Newer Post Older Post Home