By William Garena A team from the Registry of Political Parties visited East Sepik Province on the 24th - 26th November 2020 to do awareness on political parties and mentoring for women leaders. This was a key activity for 2020 and is part of the Registry’s program on supporting women’s political representation through political parties. With funding support from the United Nations Development Programme (UNDP), this activity together with similar activities in Milne Bay, Western Highlands and Jiwaka was able to be accomplished. 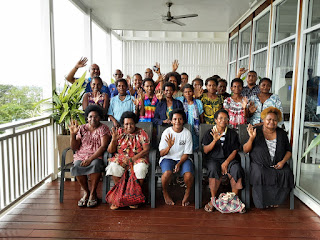 The purpose of the visit was to educate women in East Sepik about political parties and why political parties are important in our democracy. The visit also encouraged women to be members of the 46 political parties currently registered, and how parties could support them in terms of their aspirations towards getting elected into Parliament. Another purpose of the visit was to create a forum for women to engage in political dialogue and for the Registry to identify possible women candidates for the 2022 National Elections, and to prepare them through mentoring in terms of campaign strategies during the course of 2021.
The Team comprised of team leader Mr. William Garena, Mr. Solomon Puana, Ms. Marie Fraghi and Mr. Pepena Amona who began their visits in Wewak under Wewak Urban LLG, Kambagora ward under Wewak Rural LLG, and finally Tangori ward under Numbo LLG. Throughout the visits the Team was supported by Administration Officer for the East Sepik Provincial Council of Women Ms. Norah Kapari, who acted as a resource person and liaised with women leaders from Passam and Kubalea to meet with the Team. The Team took time out to pay a courtesy visit to NBC East Sepik to talk briefly on Radio about political parties, and the purpose and objectives of the Registry’s activity on Women’s Mentoring and Awareness on Political Parties in the province. 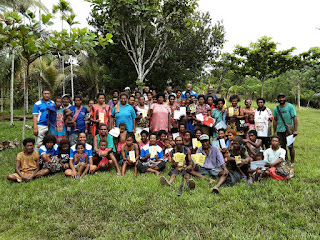 In the respective visits, membership forms for people wishing to join political parties were distributed to interested participants. A total of 48 membership forms were collected from a total of 107 participants. Just over 50 percent of the number of participants for all the visits were mostly females as the program emphasised on women however a significant number of males turned up for the meetings particularly at Kambagora and Tangori. Females made up 61 percent of the total number of party membership forms. National Alliance Party had the highest composition of membership from the party membership forms with 13 members showing interest followed by PANGU Pati and PNG Party with 7 members signing up respectively. The collected party membership forms will be given to the respective political parties to make contact with their new members once the Team returns to Port Moresby. Forms for interested women candidates were distributed as well however only 1 female from Wewak was identified to contest the 2022 National Elections.During the visits the impact of the program was immediate where participants were grateful because it gave female participants more confidence in overcoming challenges in contesting elections in the national and sub-national levels. Also participants felt empowered to share the knowledge gained on political parties with neighbouring communities and assured the Registry of their efforts in organising their own awareness through the different ward members.
As a key feature of the visit participants from the respective locations raised pertinent issues in which the Team noted. This included the following: there is a great lack of coordination between the Provincial Women Rep. and the Provincial Council of Women despite the fact that the Provincial Council of Women has 23, 000 registered women; there is a great need for political parties to come out to the rural communities and make themselves known in terms of their party policies and what they stand for; much needed party support to women and youths at the grassroots level through membership enlisting and candidate recruitment; inadequate funding to support appointed women, youth and church reps in the Provincial Assembly which has been an ongoing issue for several years.
Finally, the 3 days visit to East Sepik province proved fruitful and the Team was satisfied with the feedback from participants in the respective locations that the Team visited although the entire province was not covered. From the visit it was evident that more work is needed in the area of awareness on political parties in the rural communities and how political parties can act as pathways for women to be elected into the National Parliament. This would mean that there is a dire need for adequate funding by the National Government to support the Registry in promoting women’s political participation and representation through political parties.
Posted by pngpartynews at 9:03 PM
Email ThisBlogThis!Share to TwitterShare to FacebookShare to Pinterest
Newer Post Older Post Home