Women’s Mentoring and Awareness Program in the Western Highlands, 2020

By Emmanuel Pok Communicating with women leaders based in the Western Highlands Province was a challenge for the Registry, as there is no women’s representative in the Provincial Assembly since 2017. For unknown reasons the appointment of women’s representative to the Provincial Assembly has taken almost 3 years. Regardless of the communication barrier with the Provincial Government, the Registry used its existing local contact to give out notices and invitations to women leaders to attend the first women’s mentoring program. The Registry of Political Parties have conducted election observations for both National and Local Level Government and did some party awareness in the province, so those existing contact were used to draw women in the province to attend. 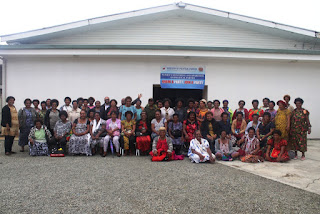 The conference room at the McRoyal Hotel was filled to capacity with women leaders and members of various women led associations. We were astonished by the attendance, and the content of information shared by the women leaders that attended. Women spoke freely about the challenges they face every day, which are common to other provinces, but they also gave testimony of the positive developments that are happening in their women’s groups and associations that needs support and further assistance.
Our program started at 9:30 am with morning tea, and continued until about 2:15pm when we had a combined afternoon tea and lunch before closing the program. Our registry at the entrance recorded a total of 179 women in attendance, but we had some women that came in late and stood outside and listened to what we were discussing. We have observed that the interest was so overwhelming, unlike other provinces that we have delivered similar program. We noticed that women from Western Highlands have organized themselves and attended the program according to their established sectors or societies, for instance the president of the provincial nurses association who has a political ambition brought with her 7 nurses to the meeting. We were surprised that nearly one third of those attended we from the Women in Business Association, subsidiary to that association were smaller groups like the women in coffee, the flower garden and city cleaning group. We had a radical group of women from Faith based association, they were very vocal in the meeting and advocated for the government to recognize the God given potential and talents women have at the national scene. There is a ‘Women in Politics’ association that still exists in the province. The president a, Ms. Maggie Numdi said the association was established during the tenure of Dame Carol Kidu when she was the Minister for Community Development. She said the association still exists despite lack of support and recognition from the Government and relevant NGOs. We were privileged to have some business women who shared their success stories that motivated other women as well.

After the opening prayer by a female pastor, Mr. Pok introduced the team and made clear the rationale of the program and its expected outcomes. He gave a detailed background of the nationwide ‘Women’s Mentoring and Awareness program as an initiative of the Registry of Political Parties that is well supported by the United Nation Development Program (UNDP) and the United Nation Women’s Program (UNWomen).
Because of the time factor, Mr. Pok asked only women leaders of each association/group to introduce herself and the nature of her association’s business. He also asked women leaders who stood for past elections or want to stand for elections in the future to introduce themselves as well. He explained, that this is a public forum to get introduced to women leaders who are ready to take on political leadership, so they should feel free to come out and talk. After knowing and fully understanding the theme of the program, every women in the conference hall wanted to give their piece of thought about women in politics. 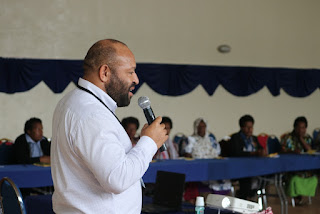 After all the introductions, Mr. Pok did a power point presentation with the topic “Awareness on Women Political Participation and Representation”. The presentation gave an overview of women’s engagement in national politics before and after the 2017 national elections in Papua New Guinea. He briefly gave some statistics on how women candidates polled in the national elections and how they can engage themselves meaningfully with political parties to gain support and contest future elections. In his presentation he highlighted some very important initiative taken by the Registry of Political Parties to legislate the participation of women in Politics after the women’s reserved seat bill failed. He made reference to the revised OLIPPAC and explained on the 20% quota and the anticipated impact this section of the law would have when it gets passed.
Mr. Pok made it clear that women and children’s voices are not represented in Parliament as there is no women MP elected after the 2017 elections. A very important pillar of democracy, “equal representation” is absent. He reiterated that women represents half of PNG’s population and them not represented in parliament is a sad situation in our democracy. He encouraged women to organize themselves and mobilize their resources in unity to support women who have leadership qualities that are willing to contest elections.

Some of the key points presented apart from those mentioned above are:
• Roles and Responsibilities of IPPCC and the OLIPPAC
• How to be a member of a political party and its importance
• Contact address of political parties
• Collecting Women leader’s profile and the expected outcome, an initiative of IPPCC and UNDP
The session also gave the opportunity for the women to ask questions to the team. Alot of issues were raised during the session. Some included; election administration, cultural barriers, financial, security, political parties including the issue of the Reserve Seats. Mr Pok briefly outlined the reasons why this bill was shelved. He also highlighted the Registry’s work in promoting women’s participation in elections especially the idea of the proposed 20% quota by political parties should the Revised Organic Law on Political Parties and Candidates Commission (OLIPPAC) be passed in this parliament term. Many women welcomed the idea. The interaction and discussion amongst women participants opened the avenue to have a continued dialogue through a committee that they proposed to form after the team leaves. 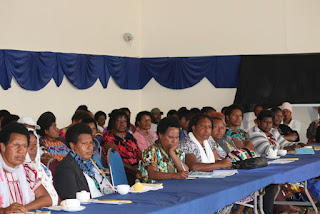 Many women acknowledged that this program empowered them to now participate meaningfully through this democratic process of electing good leaders in particular women leaders. They also took the time to acknowledge the importance of this activity and thanked the Registry and its partners for bringing this program to their level.
Posted by pngpartynews at 9:36 PM
Email ThisBlogThis!Share to TwitterShare to FacebookShare to Pinterest
Older Post Home