By Claudio Labeli
The Registry of Political Party conference venue was used by the Peoples Party to review the party policies, constitution and structure for three days starting on the 20th – 22nd November 2019. The workshop saw a think tank of party followers from different professional backgrounds come together for this event. Included in the workshop were some Registry staff 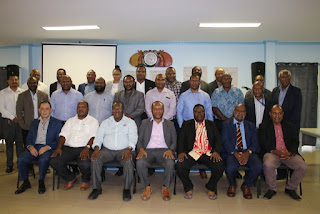 Peoples party is a registered party under the Registry of Political Party. It was registered in 2006 and has participated in three national elections beginning with 2007, 2012 and recently in 2017. It is currently in the collation government holding the second highest position in the country through the Member for Esa’ala Hon Steven Davis as the Deputy Prime Minister and Minister for Justice and Attorney General. The other six parliamentary members are the Party Leader and Governor for Jiwaka, Hon Dr William Tongamp, Hon Sir Peter Ipatas, Governor for Enga, Hon Wake Goi, Member for Jimi and Community Development Minister, Hon John Kaupa, Member for Moresby North East, Hon Dr Lino Tom, Member for Wabag and Hon James Donald, Member for North Fly.
The three day event concluded with a final draft produced and presented to the Party Leader. Dr Tomamap extended the invitation to the Registry and Party followers for the upcoming national convention in 2020 where it would present it to the party convention. The closing of the workshop was attended by the Deputy Prime Minister Hon Steven Davis, Community Development and the Registrar, Dr Alphonse Gelu.
Posted by pngpartynews at 6:24 PM
Email ThisBlogThis!Share to TwitterShare to FacebookShare to Pinterest
Newer Post Older Post Home