By Dr Alphonse Gelu
I as the Registrar, felt obliged to respond to these letters by pointing out certain aspects of the nature of political parties in Papua New Guinea (PNG) and to highlight the issues on the number of parties and the effectiveness of the parties. For the concerned individuals that raised these issues, it is important to firstly understand what kind of democracy PNG is a part of. 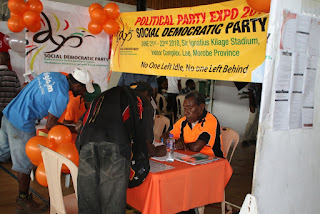 Many scholars has also given and written about other tenants of democracy which included pluralism, universal suffrage, responsible and accountable government, etc. For PNG, we are known as a “developing democracy” which implies that our democracy is still developing. We have not reached the mature state of democracy that some other countries enjoys. Our institutions are still developing ur system of government is still developing our elections still needs major improvements rights and freedoms of our citizens still needed protections our people still need to be empowered information needs to be available to our peoples our system has to promote inclusiveness etc and of course as relative to our discussion, our party system still weak and fragile.

A weak and fragile political party system is a major feature of a developing democracy which PNG fits in very well. The party system that we have has features that clearly shows a need for more improvement to our party system. Some of the features of our party system includes; no membership base throughout the country; Port Moresby based; executives ineffective; not visible throughout the country; exclusive organization with little membership of women; weak party structures; weak constitutions; no loyalty from its members especially in Parliament; controlled by one person; does not have adequate funding, parties not factor that influence voter choices; policies are weak; and no clear ideological stand etc.

The Organic Law on the Integrity of Political Parties and Candidates (OLIPPAC 2003) has even contributed to the rise of political parties due to the provisions recognizing a political party once it goes through the normal processes/ procedures for registration. The registry is very much aware of the increase in the number of political parties and has instituted number of measures to address this. One of this is encouraging smaller parties to amalgamate as allowed in the law. In the Revised OLIPPAC (2017) that would be going before the National Executive Council (NEC) by the end of the year, the registry has inserted new provisions that would indirectly decrease the number of parties. This include making parties to endorse 10 percent of candidates from the total number of seats in Parliament endorsing 20 percent of women candidates, enlisting 2000 membership throughout the country, establishing four regional party branches, renewal of registration after every two years, keep a database of membership and the registry to check on this etc..

In terms of working closely with political parties to address the inherent weaknesses in the party system, the registry since 2013 implemented a programme called “Learning and development workshops”. This is a capacity building programme that the registry initially partnered with the Center for Democratic Institute (CDI) based at the Australian National University (ANU). Trainers were brought in to facilitate training for the party executives. In 2015, the registry did this on its own with the registrar as the main trainer of facilitator for the programme. This programme ran on a quarterly basis from 2013 to 2017 up to the national elections. Many party executives benefited from this programme and its was all funded from the budget of the registry. The training that the registry ran included; importance of parties in a democracy, party systems, strengthening party structures, roles of the executives, book/accounts keeping, developing relevant party policies, purpose of party conventions, use of volunteers, importance of enlisting membership, establishing women and youth wings, campaign strategies, fund raising, endorsement of candidates and so on. All aspects of strengthening parties and building the capacities of the party executives were all covered.

The registry was well supported by the Liberal Party Australia and the Australia Labor Party (ALP). But it was the ALP that assisted the registry to cover the entire learning and development programme for political parties. They brought in party officials from the different states in Australia to share their experience in managing their political parties. To conclude, the registry is very much aware the number of political parties in the country. The registry is working to address this issue through the OLIPPAC but more so with the Revised OLIPPAC that once it is approved by the NEC would indirectly have impact on the number of parties in the country. At the same time, the registry has workd closely with all the parties, those with Mps and those without Mps in rolling out capacity building programmes. The executives have benefited from those programmes and many are using what they learned to help improve their parties and also improve their duties.

The registry has other programmes that it had identified through its annual work plans and will roll out however the registry does face massive financial constraints to roll out its activities especially in the areas of district awareness on political parties and secondly on the mentoring of women candidates in preparation for the 2022 national elections.
Posted by pngpartynews at 8:53 PM
Email ThisBlogThis!Share to TwitterShare to FacebookShare to Pinterest
Newer Posts Older Posts Home
Subscribe to: Posts (Atom)