PNG TOPS COUNTRIES IN THE COMMONWEALTH ON CAMPAIGN FINANCE REGULATION 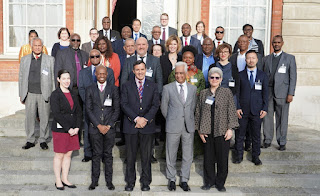 By Dr Alphonse Gelu
The Registrar, Dr Alphonse Gelu attended a meeting in London organized by the Commonwealth Secretariat from February 10th to February 12th, 2020. The meeting was attended by 16 countries in the Commonwealth and to discuss how the countries have legislated in this area and how effective it was in their respective countries.
For many of the countries that attended, they have come up with various laws and measures to address campaign finance however many have failed in passing the laws in their respective Parliaments. Jamaica and South Africa are the only other two countries that have laws in place but for Papua New Guinea, the OLIPPAC outlined clearly what is campaign finance and the need to comply in terms of disclosure both by the candidates and the political parties.
The Registrar while addressing the meeting mentioned that there are still challenges that needed close scrutiny and some of these had been captured in the Revised OLIPPAC. But from this experience and knowledge, it was something positive for Papua New Guinea and its Leaders who were determined to institute legislative regulations to ensure that money used in the elections are “clean money” and were used for the intended purpose. The need to disclose the money is also an important step to ensuring that transparency is nurtured and maintain in the election process in the country.
Posted by pngpartynews at 7:09 PM
Email ThisBlogThis!Share to TwitterShare to FacebookShare to Pinterest
Newer Post Older Post Home