By Solomon Puana The Registry of Political Parties has been a key partner to the Transparency International – Papua New Guinea (TIPNG) as it has continuously offered its technical assistance to TIPNG’s work on the parallel report on the country’s implementation of the United Nations Convention Against Corruption (UNCAC). 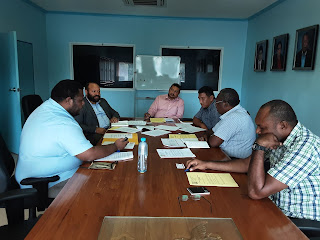 The UNCAC was adopted in 2003 and was enforced in 2005 and is the first legally binding anti-corruption agreement applicable on a global basis. Under the UNCAC, all member states of governments are to provide a report or review on the implementation and fulfilment of obligations on a multi-year periodic basis. The TIPNG has been engaged by the UNCAC Coalition to provide the parallel report on behalf of the PNG Government to ensure accountability and transparency of the review process.
On Wednesday 24th February 2021, the Registry met with TIPNG’s Representative, Mr. Yambari Haihuie who is the Deputy Director Partnerships and Policy. The meeting was held in Pala Conference Room at the Office of the Registry of Political Parties. The purpose of the meeting was to discuss and complete a set of questions in line with Article 7 and 8 of the UNCAC which Papua New Guinea acceded to in 2007. The Registry was identified has one of the key agencies to the UNCAC report as its mandate and work meets the objectives of Article 7 and 8 of the UNCAC which relates to political financing. Other relevant agencies will also be interviewed for their views to finalize the report and published.
Posted by pngpartynews at 8:29 PM
Email ThisBlogThis!Share to TwitterShare to FacebookShare to Pinterest
Newer Post Older Post Home