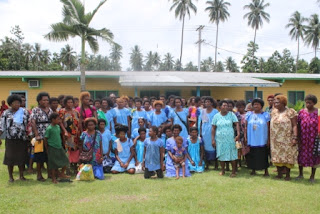 The Mentoring Women and Awareness on Political Parties Program for 2020 ended in West New Britain Province (WNBP). This time it was without the support and assistance of United Nation Development Programme (UNDP) and UN Women. The Registry in its efforts conducted the program in WNBP from 7th to 11th December 2020. The program was held in four different locations where people especially the women turned up in numbers. The first mentoring women and awareness on political parties program was conducted in Kimbe, the second in Bialla Town, the third in Hoskins and the fourth was in Valoka village. Of the 22 provinces, WNBP was one of the two provinces that had no women candidates contesting the 2017 National Election. The Registry saw that there was a need for an awareness on political parties and mentoring women to be conducted in WNBP to encourage and give confidence to the women. During the entire 4 days program in the four areas of WNBP in which the Registry visited. The Registry was amazed with the interest and turn out of the people especially the women who attended and participated during the programs conducted in those 4 locations.
The first mentoring and awareness program was held at Genesis Haven conference centre in Kimbe where a total of 47 participants (3 males and 44 females) attended the program. Bialla in the East Nakanai LLG was the second location the Registry visited to conduct the party awareness and mentoring women’s program. The program was held at the Bialla Higher Ground Resource Centre. During the program the Team was privileged to have the President for East Nakanai LLG, Mr. James Laula including the Ward Members and Women Leaders. The Registry had a big turn out where a total of 93 participants (both male and female) attended the program. The third and fourth visits were in Hoskins LLG. The awareness and mentoring program was held at the Hoskins LLG Chamber where a total of 73 participants attended. Beside this the Registry concluded its mentoring and awareness program in Valoka village which was not far from Hoskins Town. The turn-out was also good as many people both men and women including the youths and children were all there to listen to the Team. 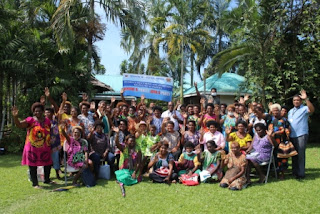 The mentoring and awareness program was a success for the Registry as it created a dialogue amongst the women folks. The women in WNBP have expressed their views that this program is a first of kind, in terms of information dissemination. With the presentations and experiences shared by the Registry, they now have come to realize the strength of networking and how effective it can be used to work against money politics. Women in WNBP were not organized and with this program, it has encouraged women to organize and work together at the LLG ward levels so that they can achieve what they want.
During the entire mentoring and awareness program, a total of 46 memberships where enlisted. And also a total of 5 women leaders have put their hands up to contest the 2022 National Election. 3 women intended to contest the Talasea Open Seat while 2 women intended to contest the West New Britain Provincial Seat in 2022 National Election. These are the women that the Registry of Political Parties will be working closely with.
Posted by pngpartynews at 8:18 PM
Email ThisBlogThis!Share to TwitterShare to FacebookShare to Pinterest
Newer Post Older Post Home