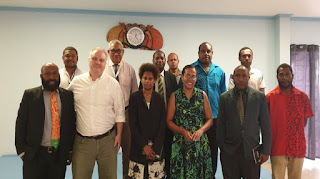 The Registry assisted and organised a meeting for the United National Development Program (UNDP) and five political parties. UNDP is working with the National Parliament of Papua New Guinea (PNG) in conducting a needs assessment for the PNG Parliament.

The overarching outcome of the Needs Analysis and subsequent parliamentary support is to ensure that systems and processes are in place to provide for a Parliament that can efficiently and effectively undertake its legislative, oversight and representative functions, with a view to strengthening good governance and development outcomes in PNG. The Needs Analysis will both identify gaps in current structures, processes and human resource capacity and propose recommendations to strengthen the legislature.

Expected outputs from this assessment is:
Two groups were identified in order to conduct this assessment which was A) Parliamentary Leaders and B) Political Parties who had members of Parliament. This is where the Registry came in by identifying parties to take part in the assessment.

Ms. Nanise Saune-Qaloewai of UNDP Fiji and Mr. Kevin Deveaux former Canadian Member of Parliament and UNDP Consultant overseeing this analysis met with the five political parties on the 12th March 2019 at the Registry of Political Parties’ Bengo Conference room. A question was asked to the political parties if there was a need to provide support to parliament, their perception of parliament and if political groups were connected to parliament. The focus of these questions was to share knowledge and experiences of other practices of parliamentary systematic processes in other countries such as Fiji, Canada, Australia and New Zealand.