By William Garena
The Registry was visited by the United States Embassy officials on 13th September 2019. The purpose of their visit was to introduce the Embassy’s new Political Officer Mr John Skerry, who was accompanied by the Embassy’s Political/Economic Assistant Officer Mr George Singut. Mr Skerry replaces Miss Christine Buzzard whose tenure ended after serving the U.S Embassy for three years. Mr Skerry received congratulatory remarks on his appointment, and was welcomed into the country. 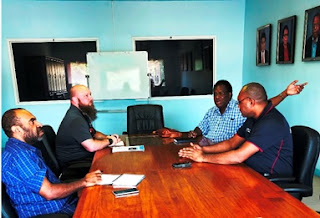 The discussions proved insightful as Mr Skerry was informed about Papua New Guinea’s political culture, and the current political climate in light of the new Marape-Stevens led Government in late May of this year. An updated listing of political party membership was also furnished to both officers of the Embassy.During the discussions both officers were made aware of the funding challenges the Registry faced in implementing critical programs that would contribute towards strengthening and promoting political parties, and democracy in the country.

It is hoped that through the new Political Officer, the Registry and the U.S Embassy can continue to work closely in supporting the Registry’s activities particularly in the area of awareness, and women in politics through political parties. The Registry has always maintained a good working relationship with the U.S Embassy, particularly in the area of information sharing, and considers the Embassy as an important stakeholder.
Posted by pngpartynews at 11:10 PM
Email ThisBlogThis!Share to TwitterShare to FacebookShare to Pinterest
Newer Post Older Post Home