By Solomon Puana
The Forum on PNG Political Parties and Women in Political Leadership was held in Port Moresby, National Capital District on the 14th and 15th of November 2019 at the Kumul Conference Centre, Holiday Inn Hotel. The two day forum was provided by the Registry of Political Parties – Integrity of Political Parties and Candidates Commission (IPPCC), with the support of New Zealand Aid Program and United Nation Development Program (UNDP). The Forum was held to support the Registry’s commitment to Promote Women’s Political Participation through Political Parties. The aim of the two day forum was firstly, to expose political party’s executives in Papua New Guinea to the experiences of their colleagues in other countries within the Pacific Region. And secondly, to maintain dialogue and linkages between women leaders who intended to contest in the national elections. The hosting of the forum would identify common issues experienced by women candidates in the past elections in order to address them with the stakeholders concerned before 2022 national elections.
The ultimate goal of the forum was for political parties’ executives and women in political leadership who contested the 2017 national elections to observe the following objectives:
• To make known their intentions to contest in the national elections 2022
• To share their election experiences with likeminded women at the political front
• To share their views about political parties in PNG
• To create sustainable ties with stakeholders and political parties through the Registry
• To make reference to issues raised and ensure that they are addressed with relevant stakeholders before the next election
The forum was privileged to have Prime Minister – Hon. James Marape; the New Zealand High Commissioner – His Excellency Mr. Philip Taula; Resident Representative United Nations Development Program (UNDP) – Mr. Dirk Wagener; and the Registrar Dr Alphonse Gelu making opening remarks to officially open the Forum. 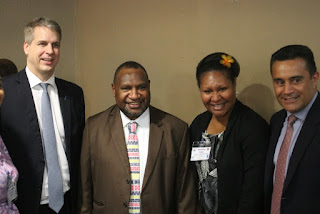