By Dr Alphonse Gelu
The Registrar is pleased to announce that one of his staff has been accepted under the prestigious Australia Awards Scholarship for intake 2020. Miss Madeline Saga will undertake a Master’s in Public Policy at the Australian National University in Canberra, the Australian Capital Territory. This is the first for the Registry and the Registrar is overwhelmed with satisfaction that this has come about as a result of his emphasis in training for staff at the Registry. 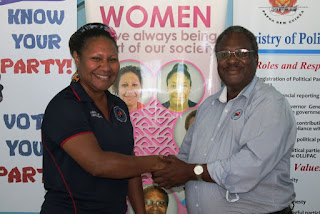 Miss Madeline Saga is the Senior Policy and Research Officer under the Policy Division. Madeline was charged by the Registrar to oversee the performance of female candidates during the 2017 national elections and the local level Government elections of 2019 including the Motu Koita LLG elections of 2018. Madeline had also committed her time and efforts towards women in leadership programs by working in partnership with stakeholders such as the UNDP, Department of Pacific Affairs, and Pacific Women, Australia Labor International and women candidates and politicians both foreign and national.
Through this exposure of creating avenues for women to get elected into parliament Madeline became passionate about the need to support this cause that would enable and encourage the younger generation to support female leaders. This study award is a timely opportunity that will allow her to create an effective approach for Papua New Guineans to elect candidates based on their leadership qualities and their integrity amongst their contribution to their local constituents regardless of male or female. She values her time spent working and sharing ideas with the Dr Nicole Hailey and Dame Carol Kidu under the PNG Women in Leadership Support Program, Dr Lesley Clark and Mr. Elias Hallaj from the Australia Labor Party and Ms. Julie Bukikun of the UNDP.
Finally I would like to thank Dr Lesley Clark for your expert contribution to the Registry and your mentoring to the staff and your words of encouragement and support to Madeline.This award is a great leap forward for both Madeline and the office of the Registry in that it will encourage her colleagues to work diligently into pursuing further qualifications in order to create an effective and accountable public service. The Registry is thankful to the Australian Government’s commitment to its continued support to developing Papua New Guinean leaders through this partnership. To Miss Saga, we wish you well in your studies as an ambassador for our office and country.
Posted by pngpartynews at 6:44 PM
Email ThisBlogThis!Share to TwitterShare to FacebookShare to Pinterest
Newer Post Older Post Home