By Solomon Puana
The opening address and official opening of the forum was done by the Prime Minister, Hon. James Marape. He thanked and acknowledged the distinguished guests, participants and the organizers of the forum for inviting him. In his opening address, he said that despite PNG been mentioned as one of the countries that have no women representation in Parliament, PNG women’s participation in political leadership is not bleak. He said that there is room for improvements to be made and his government is committed to clean the electoral process to ensure that there is free, fair and safer elections to provide a conducive and an equal playing field for both women and men to participate in the elections on merits. Prime Minister, Hon. Marape further stated that women must not be appointed into Parliament by using any forms of Temporary Special Measures (TSM) but must contest the elections like men. He added by saying that, despite, having no women in this term of Parliament women have always been contesting the elections, became MP’s and have performed well as MP’s since 1972. 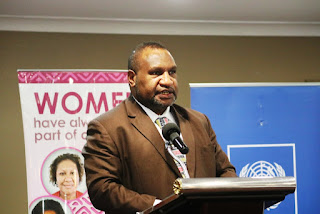 The Prime Minister also commented that his Cabinet will look into the Revised Organic Law on the Integrity of Political Parties and Candidates (OLIPPAC) and bring to parliament for possible approval and passage. Hon. Marape also said that his government will support the Registry of Political Parties in its work and urged the Registrar, Dr. Alphonse Gelu and his team to continue the work on promoting and strengthening political parties and their policy platforms leading up to 2022 national elections. He also made mentioned that, there will be incentive based programs for political parties to ensure that more women are engaged.
Posted by pngpartynews at 6:15 PM
Email ThisBlogThis!Share to TwitterShare to FacebookShare to Pinterest
Newer Post Older Post Home