Awareness on Political Parties in Alotau during Festival 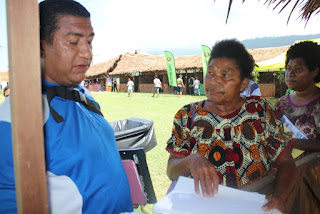 By Solomon Puana
While the Registry has begun with the political party expositions and the district awareness on political parties in Port Moresby, Madang and Lae in 2017 and 2018, the Registry now has taken a new approach by implementing its awareness programs through the cultural festival events that are held annually in the different Provinces. This awareness on political parties during the 15th National Kenu and Kundu Festival in Alotau, Milne Province from the 2nd to 5th November, 2018 was a trial and error for the Registry in implementing its awareness program and also to plan ahead for the next annual cultural festival events such as the National Musk Festival in East New Britain Province, the National Garamut Na Mambu Festival, the National Bilasim Skin Festival, the National Arts and Craft Exhibition, Hiri Moale Festival in NCD, Yam Festival in Milne Bay Province, Hagen Show in Western Highlands Province, Goroka Show in Eastern Highlands, Lae Show in Morobe Province and etc.

The Registry was a minor corporate sponsor to the 15th National Kenu and Kundu Festival as it would be an opportunity to disseminate vital information about political parties and at the same time directly engaging with the people from the local communities. The Kenu and Kundu Festival has become a must attend event annually where it attracts and brings together the diverse communities in Milne Bay Province.

During the festival, the Registrar also took time to go live on-air at NBC Radio Milne Bay to explain to the public why the Registry was present during the Kenu Festival and its purpose. The Registrar also talked to students and teachers at Hagita Secondary School about political parties and their importance in any democracy.

Based on the learning experiences during the Kenu and Kundu Festival, the Registry now is looking forward to the next set of annual cultural festival events that will be held in other provinces to continue its awareness campaign on promoting and strengthening political parties in the country. But again it will depend on the support and funding from the Government that will determine the continuity of the Registry’s activities and programs in terms of awareness. However, based on the positive outcome from the people the Registry feels that the Government should adequately fund and support this important activity so that the Registry can continue on with its awareness program on political parties to educate the people for the good of this country as a whole.
Posted by pngpartynews at 4:59 PM
Email ThisBlogThis!Share to TwitterShare to FacebookShare to Pinterest
Newer Post Older Post Home