Meeting with Auditor General on Report

By Jacinta Rakuafery
Audit for the first time was conducted by the Auditor General Office on the accounts and records of the Office of the Registry of Political Parties for the year ended 31 December 2016 and the report was received by the Registrar. Dr Gelu on the 29th August 2019. 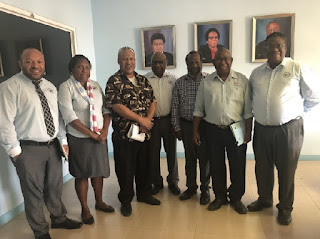 The Management was given the opportunity in the Management Letter received from AGO on audit observations arising from the audit for corrective actions where necessary.The management met with Senior Officers from AGO on the 2nd of Oct to correct findings in the audit report. Management were given the opportunity to sought clarifications and confirmation. Matters raised will be responded to and submitted to AGO by end of the October 2019.
Posted by pngpartynews at 11:26 PM
Email ThisBlogThis!Share to TwitterShare to FacebookShare to Pinterest
Newer Post Older Post Home