2019 LLG Elections Observations by the Registry

By Emmanuel Pok
In every LLG elections, the Registry together with other stakeholders conduct an important exercise known as the 'election observation'. In this activity we form special teams to observe the participation of political parties, candidates, voters, supporters and citizens during the campaign, voting and the counting periods. Reports from the election observation teams informs us of the behavior and the way interested groups participate in the elections. Observing the elections thoroughly informs us as policy makers to make informed policy decisions on improving our electoral system.
The Registry's primary role is to ensure that political parties and candidates are well prepared to participate in both the National and Local Level Government elections. The Registry has invested in political parties in the past years to strengthen political parties and preparing them to participate meaningfully in elections. The 2019 Local LLG election was an opportunity where parties could participate and make known of their policies to the voters and also to recruit members to their parties. That was also an opportune time for the Registry to monitor the performance of political parties and their candidates at the very local level and our communities, and make an evaluation that will shape and influence our future work with them. The 2019 LLG Elections was an important election we observed, as it informed us on necessary improvements needed in our electoral laws, voting system and the democratic processes involved in that election. Observation Teams The Registry has initially planned to observe at least three randomly selected LLGs in two provinces of each of the four regions of PNG. However, due to budget shortfalls and other logistical matters, the Registry was able to observe elections in the following LLGs; Region Province District LLG Highlands Western Highlands Hagen, Mul Byier, Tambul Nebliyer Hagen Rural, Hagen Urban, Neblier, Mul Southern Milne Bay Alotau Huhu   Central Kairuku Hiri Kairuku   Oro Soe/Ivijitari Popondetta Urban/Higaturu   Gulf Kerema Malalaua NGI New Ireland Namatanai Namatanai   ENB Rabaul, Gazelle Rabaul Urban, Toma Vuna Didir Momase Madang Madang Madang Urban, Trans Gogol 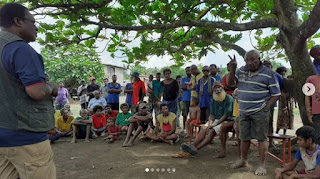   Team members were out in the LLGs mainly during campaign periods, as this is the period where parties would freely communicate with their people and campaign for their candidates. A set of questionnaire was prepared and used by all the teams, these were mostly around the participation of the political parties and the participation by women candidates. Individual teams have compiled a detailed report with key observation findings of each LLG they observed. These reports will be compiled into a single report that will be distributed amongst the stakeholders. Some of the mail highlights of the observation are: Political Party presence is yet to be felt at the local level where majority of the population is in the country. Many of the contestants said they were not approached by a political party to contest the seat under a party banner A good number of women were interested to contest the LLG elections, as they believed that this is where they could have a voice. Many were not financial members of a political party. People have a perception that political parties are there to contest the National elections and not for the local level. Observing the LLG election was important because it would provide the Registry the necessary information it needs on the participation of the political parties. It has been stressed to the parties that they need to grow their roots at the village and community level. Their participation at the LLG election is therefore critical for their long term existence as political organizations
Posted by pngpartynews at 4:06 PM
Email ThisBlogThis!Share to TwitterShare to FacebookShare to Pinterest
Newer Post Older Post Home