By William Garena
The Mentoring Approach is a new initiative and is one of two flagship programs identified in the Registry’s Corporate Plan 2018-2022. The mentoring approach entails a series of quarterly sessions which began in November 2018 and will continue to 2021. The aim of the sessions is to build the capacity of party executives where designated staffs of the Registry will act as mentors in mentoring and coaching party executives about some basic knowledge of what political parties are, and what their responsibilities are as executives. The sessions take an interactive approach between mentors and executives of political parties and target Presidents and General-Secretaries of political parties. The 2019 second quarterly mentoring session took place at the Registry’s Bengo Conference Centre in Port Moresby from 19th – 21st March 2019. From the 45 registered political parties only 9 parties attended the second quarterly mentoring session. Political parties that attended included: United Resources Party (URP); Papua New Guinea National Party (PNGNP); Papua and Niu Guinea Union Party (PANGU Party); Papua New Guinea Party (PNG Party); Triumph Heritage Empowerment Party (T.H.E Party); Grassroots United Front Party (G.R.U.F Party); and Papua New Guinea Greens Party (PNG Greens Party). Only two parties without Members of Parliament (i.e. G.R.U.F Party and PNG Greens Party) attended while the remaining seven parties had Members in Parliament. 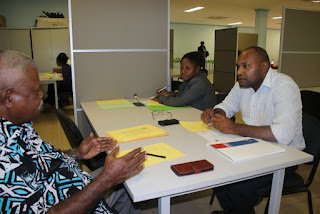 For this quarter’s mentoring session, political parties were expected to give feedback on critical areas related mostly to the general administration of parties and their daily operations. These critical areas included: 2019 LLG Election preparations; Membership Recruitment and Membership fees; Party Conventions after the 2017 National Elections; 2019 Annual Activity Plan; and Support to Women. Also mentors took time to update party executives on important ongoing activities by the Registry such as the status of the revised OLIPPAC, entitlements for General-Secretaries and the Training Manual for party executives.
Throughout the session it was noted that most political parties did not plan to put up candidates for the 2019 LLG Elections. This was due to the lack of fundraising initiatives by parties to raise enough funds to support their LLG election preparations. The financial challenges experienced by most parties also prevented them to conduct awareness throughout the country in making themselves and their party policies known to the people. Another factor that contributed to the lack of focus in preparing for the LLG elections especially for parties with MPs, was the anxiety and uncertainty of the political climate during the vote of no-confidence period. Some issues raised by some party executives during the mentoring session related to the movement of MPs between different political parties, and financial support to maintain their respective party’s daily operations.
The Third Quarter Mentoring Session for 2019 will continue in September at Port Moresby, Bengo Conference Centre. It is hoped that all registered political parties are expected to attend and take ownership of this wonderful initiative provided by the Registry, in promoting and strengthening political parties and democracy in the country.
Posted by pngpartynews at 4:11 PM
Email ThisBlogThis!Share to TwitterShare to FacebookShare to Pinterest
Newer Post Older Post Home